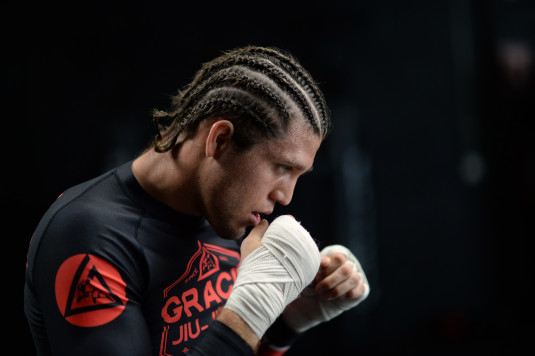 Brian Ortega sustained quite a bit of damage in his failed December title bid opposite UFC featherweight champion Max Holloway. After several months of healing, however, the talented featherweight contender is one again clear to compete.

He announced this exciting news in a recent interview with TMZ:

“Saturday was my official time when everything got cleared,” Ortega told TMZ (transcript via MMA Mania). “My nose is cleared, my hand is cleared, everything. Now it’s time to get out there and put my hand to the test and really get to work now. I’m looking at something maybe in summer. I’m ready to go back out there and fight whoever I have to fight, prove myself again, show the world that (UFC 231) just wasn’t my night and we can make it happen again.”

While Ortega came up short in his first fight with Holloway, he believes they’re destined to fight again, and as he suggests above, he feels that a rematch could unfold very differently.

“There’s a lot of things I could have done different, especially if I showed up in the right state of mind,” Ortega said. “I told everyone, this is not the first time him and I are gonna meet. We’re gonna meet each other multiple times in this weight class or the next. We’re both young, we’re both learning. With the right adjustments, it could really easily be a different fight, and without breaking my freakin’ hand and nose and getting everything messed up.