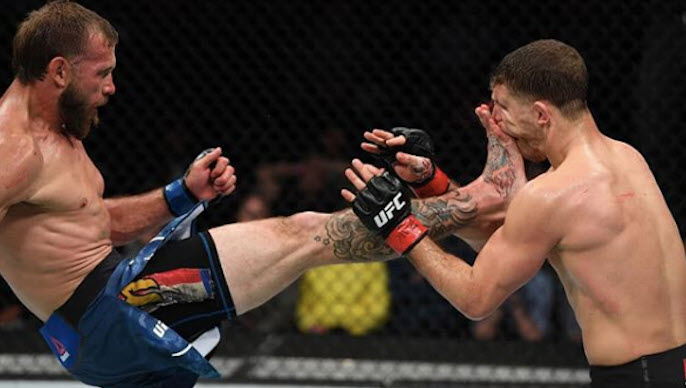 Al Iaquinta lost to Donald Cerrone in the main event at UFC Ottawa earlier this month. Al had been silent mostly post the loss.
However, speaking on the Ariel Helwani’s MMA Show recently, Al Iaquinta opened up on the injuries he dealt with from that fight and more.

Here’s what he had to say:

“I broke my nose, I fractured my (right) orbital bone and had some deep bruising on my legs because of those kicks.(The bruising from the kicks) was brutal. I’m just finally starting to be able to move around. It took its toll. That won’t happen again, that’s for sure.”

“He hit me with a stiff jab that I don’t know if it broke my nose, it cut my nose open. He hit me with a bunch of shots so it could have been any one. He did cut me open; that could’ve been the one. I think it was somewhere in the third round where he caught me in the eye, the third or the fourth round. It definitely affected my vision, and it definitely was something tough to fight through. But it is what it is. I train to be in those situations.”

“I had every opportunity to win the fight, and I should’ve, but I didn’t. He beat the (expletive) out of me the way a veteran gets it done. He’s good, man. He’s good.”