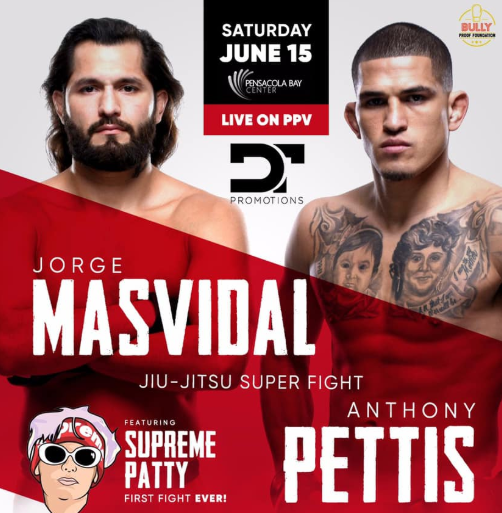 It was a fun fight last Saturday night, as Jorge Masvidal fought out a sensational draw with fellow UFC welterweight contender Anthony Pettis.

The duo met in a charity wrestled match but after ten minutes of entertainment and fun actions, the referee adjudged the fight a draw, with the two sharing a lot of fun and success.

Jorge Masvidal spoke ahead of upcoming episode of BJPenn.com Radio about the reason he took part in the contest.

“Well, I like to grapple,” Masvidal began. “I’ve been wanting to grapple for a while and I really haven’t told too many people about it. And my manager’s trying to ding me and he’s like, ‘Hey, this charity reached out to me. They’re putting together an event, you know’. First he told me what it’s going to support, and that’s to get kids from troubled areas, not such great areas, that can’t afford the gym, they put them in the gym, they buy the membership. They just give them something to do. Man, I was instantly sold, you know. I was like, ‘f**k yeah I got to be a part of that, bro.’ If this is what’s going on then count me in, you know.

34-year old mixed martial artist Masvidal will engage Ben Askren in UFC 239 fight in a dat yet to be announced. He however, believes his participation would help him in his preparations.

“So, then my manager started looking at who I could possibly grapple and then Anthony Pettis came up and I was like, ‘wow perfect.’ I thought I would be grappling against a straight grappler or something. And it might not generate the same type of buzz with against Pettis which is a known, known fighter. And he’s a star grappler, I mean, he’s submitted some tough guys that are not easy to submit. So, it’s going to be fun man. I’m going to have a blast. It’s pretty cool man. I can’t not be apart of it. And I think when a lot of the other fighters find out about it I think it just be like a trend of a lot of guys just competing and give back. It’s a way I can give back that is so amazing, you know. Because, man this is what I do on a regular day. I’m going to grapple for 10 minutes. I do it every day times 10, you know.”

The charity event also featured  a number of fights from UFC middleweight category including Yoel Romero and Chris Barnett, with the latter drawing Barnett.